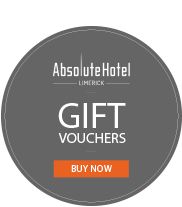 Limerick is Ireland’s third-largest city and its most friendly and welcoming destination. One of the oldest cities in Europe, a Viking city dating back to
the 9th century. The castles, ancient walls and museums are all a reminder of its dramatic and captivating past. Limerick is well-known for its many archaeological and historic wonders as well as it being the economic core of Ireland’s Mid-West, but it is widely known for its warmth and hometown feel.

Explore King’s Island - the Medieval Quarter, home to the Absolute Hotel, King John's Castle and St. Mary's Cathedral - one of the oldest buildings in Limerick. Immerse yourself in Limerick’s fascinating history at the nearby Hunt Museum which houses over 2,000 works of art and antiquity, or take a walking tour or a kayaking tour of the city to see Limerick’s medieval gems from a completely different perspective.

Limerick city’s recently developed waterfront provides a charming and peaceful experience on the banks of the majestic River Shannon.
Visit the beautiful urban oasis, that is the People’s Park, a stroll away from the Limerick City Gallery of Art, the largest contemporary art gallery in the
Mid-Western Region.

We have put together some exciting activities to keep you entertained, whether you're staying with us for 24, 48 or 72 hours.